I dislike hearing about Octomom 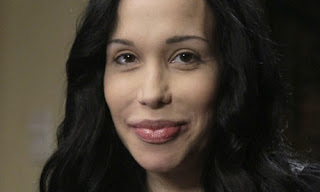 Octomom, please go away
They want to give Octomom a TV show of her own. Noooooooooo! Please don't! Then I'd have to hear about her every day instead of every other day.

My biggest problem with Octomom at first was the nickname they gave her. When I hear Octomom I'm thinking about a half octopus, half human woman who works by day as a loving parent and at night she fights crime.

She doesn't have a secret identity because you can't hide eight arms. Even if you have a pair of glasses as bitchin' as Clark Kent's.

Unfortunately, Octomom does not fight crime. She is just a nutty woman the world keeps paying attention to. She's not fun nutty though. She's child neglect nutty. Which is a real shame. How cool would it be if she had 14 kids just so she could raise her own personalized army of ninja babies?

My second biggest problem with Octomom is that THEY ARE NOT ASKING THE RIGHT QUESTIONS. They take photos of all the babies and put them in magazines with their names. Are those for us or for the mom so she can figure out who is who? I don't CARE about baby names. If they're going to force me to read about Octomom, I want them to write something unique about her. For example, no one has told us anything about her snatch. Does it still work like a regular one? Or is it now regularly used for shoplifting gallon jugs of milk? 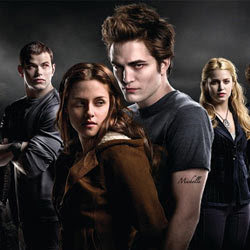 I will read anything if it has a vampire in it. I would read an economics textbook cover to cover if you told me a vampire was in there somewhere. That might be a mental problem I have, but I digress.

I can't read Twilight. My eyes glaze after two words. My soul shrivels after a sentence. And finally, I pass out approximately one paragraph later.

Part of it is the descriptive prose. Does every noun REALLY need four adjectives? Someone needs to break in on Stephanie Meyer and say the following:

"Put your hands in the air. Step AWAY FROM THE THESAURUS!"

Then, the brave intruder needs to confiscate it.

Let's do that scene Stephanie Meyer style shall we?

...Someone needs to break into the dwelling abode of the fantastic, stupendous authoress with pale skin that appears incandescent under the moonlight and shout loudly in a powerful voice: "Take your lovely, well-shaped hands off the ancient musty book with the greenish leather cover and place them overhead as though you were reaching for the sky. Now, in this moment if you would be so kind, you must stand and move swiftly away from that book, referred to often as the thesaurus.

How bout you my malcontents? What do you think? How about the movie? Who thinks Robert Pattinson would do better acting in the film if he took a few laxatives? How about Pattinson in lipstick? Girly or what? And what's up with making him look like a dead neanderthal with a mini-pompador in the promo photo?
Posted by K. Curmudgeon at 12:14 AM 2 comments:

I saw the Watchmen movie. As a fan movie of Alan Moore's classic, it was great. I even liked the re-write at the end. But that is neither here nor there, because for the most part, all I ever hear about when someone mentions this movie, is Dr. Manhattan's weiner.

Really? it wiggles? Was that a CGI team? Somewhere, are there a bunch of CGI artist that have to put 'Animation crew for Dr. Manhattan's wiggly blue weiner?'

What kind of discussions did the crew have?

But I digress. My point was, the blue weiner has taken over the entire film! In fact, when I went to see it, I learned afterwards that my friend's husband requested that she count appearances of the giant blue weiner. There's a couple conversation - not how was the movie? Just, 'so how many times did his weiner show up?'

I wish I had never heard about how annoying Dr. Manhattan's weiner was, because when I watched the film I kept noticing it. For example, in the early part of the movie, Dr. Manhattan shows normal endowment. By the end of the movie, it looks as though he's hung like a horse.

I kept thinking why can't they just put him in superhero underpants? would it kill them to cover it up? I would never have to hear about it again.

Except that's not true. The new conversation would be whether or not Dr. Manhattan stuffs his outfit.

The worst part of all the weiner whining? a male friend who has never seen the movie refuses to read the comic book. His reason? 'I don't want to read about a giant blue penis!' The amount of horror in his voice as he said it gave the impression he thought it was going to be a pop up book.

I truly dislike the giant blue weanus discussion. My beloved graphic novel, The Watchmen, an ingenious, gritty storyline that delves into the darker side of what it means to be human, has been reduced to nothing but a big blue weenie.

So what do my malcontents think? Watchmen - great movie, or should they retitle it the Giant Blue Weenie?
Posted by K. Curmudgeon at 3:23 PM 4 comments: 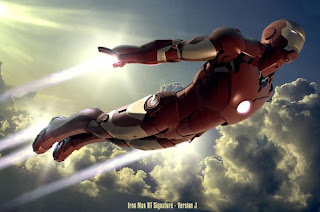 Everyone raves about what an amazing movie Iron Man was.

I thought it was terrible. The script suffered from extreme multiple personality disorder. Every three minutes I had to ask myself what genre I was witnessing. Is it campy fun? a comedy? high-tech? an action movie? dramatic?

The answer to those questions is 'No.' It tried to be all of them and made me feel like I was watching the film version of Frankenstein's monster. Nothing blended. They have one scene where Tony Stark's high-tech chest gizmo looks like a soup can stuffed into his chest with a light bulb screwed in for special effect. They have another scene where Stark is building super high tech gadgetry which makes him fly. Which is it Ironman?! Is it cheesy campy soup can chest goodness, or is it high tech transformers-movie-worthy gadgetry? Pick one.

Also, while the trio of stars Gwyneth Paltrow, Robert Downey Jr., and Jeff Bridges worked hard to carry the film to its conclusion, Bridges ends up being the only interesting performer onscreen.

I don't think anyone can fault Paltrow or Downey though, they turn in admirable performances given what the script demands of them.
Posted by K. Curmudgeon at 8:55 PM No comments: 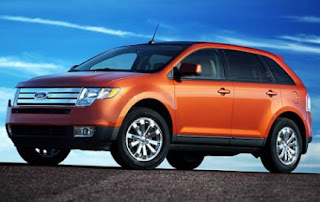 Retaaaaaard-ed!
The SUV has long been an American status symbol. It represents wealth, power, and if it's being driven by a middle-aged man, it represents a midlife crisis.

To everyone who doesn't own one though, the SUV just stands for overprivileged, gas guzzling idiots who think unnecessary off-roading features for suburban driving and being able to waste money on gas is a great way to show off.

Then they came out with the hybrid SUV. Now SUV owners who felt guilty about wasting gas can pretend they're helping the environment because their hybrid SUV wastes gas at a slightly slower rate.

Hybrid SUVs are like overpriced tacky jewelry. They standout, they make the owner feel special but newsflash - if you own one we're all rolling our eyes over it. And if you're clueless enough to have bought one, we're probably not doing it behind your back either.

What other stupid ideas for going green have you seen?
Posted by K. Curmudgeon at 12:32 AM No comments: